Behind the Scene: A Closer Look at President Xi’s Visit to Kazakhstan and the Capital Name Change of Astana

On September 14, Chinese President Xi Jinping arrived in Nur-Sultan, his first overseas trip since the outbreak of COVID-19 in January 2020. “Bound together by mountains and rivers and common interests, China and Kazakhstan are good neighbors, good friends, and good partners,” said President Xi in a signed article before his state visit to Kazakhstan. A few days later, Kazakh President Kassym-Jomart Tokayev signed a law limiting presidential terms and reverting to the old name of the Central Asian country’s capital, Astana. 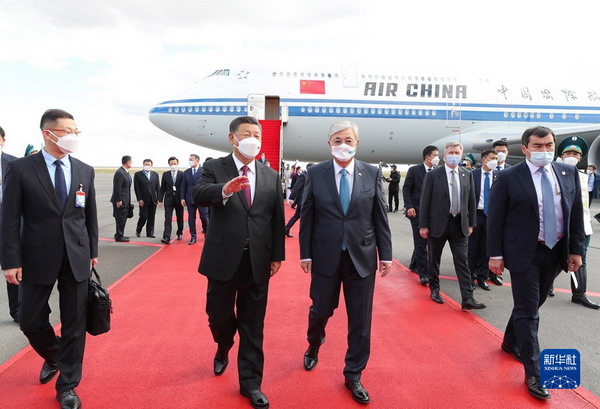 As the ninth-largest country in the world in terms of territory and the second-largest republic in the former Soviet Union, Kazakhstan was endowed with over 72 different natural resources, including oil, gas, gold, coal, iron, uranium, manganese, bauxite, and chromite. Of these, oil and gas comprise 97% of all natural resource state revenues because the country has the 12th largest proven oil reserves and 14th largest natural gas reserves worldwide.[1] It is the world’s largest producer of uranium as well. Furthermore, considering its geographic location, Kazakhstan offers access across Eurasia to the Caspian nations and onto Europe via Russia and Turkey, minimizing national border controls and maximizing rail connectivity, and providing oil and gas pipelines that channel its energy resources directly to Europe and China. Nevertheless, although rich natural reserves have helped Kazakhstan cultivate a prosperous economy and a solid middle class, similar to other former Soviet Union states, Kazakhstan encouraged the rise of a small group of wealthy oligarchs and thus deteriorated inequalities.

The widespread dissatisfaction with inequality and corruption precipitated the bloody riots this January, which grew out of peaceful protests over a spike in car fuel prices. The incident left over 230 people dead, mostly civilians, and drew the president’s attention to launch a wide-ranging set of reforms as he called for “completely new standards for a political system with fair and open rules of the game.” Kazakhstan’s recent move to revert to the former name of the capital and limit presidential mandates to a single seven-year term, together with its economic reform approaches such as reducing the government’s involvement in the market and oligarchs’ influence on business, transforming the Samruk-Kazyna sovereign wealth fund as a supplement to private investors, and ensuring fair competition, a better investment climate, and the integrity of private properties, has again demonstrated its determination not only to eliminate triggers for further turmoil but also to restore its growth engines, especially beyond primary commodities trade and the inflow of foreign direct investment. 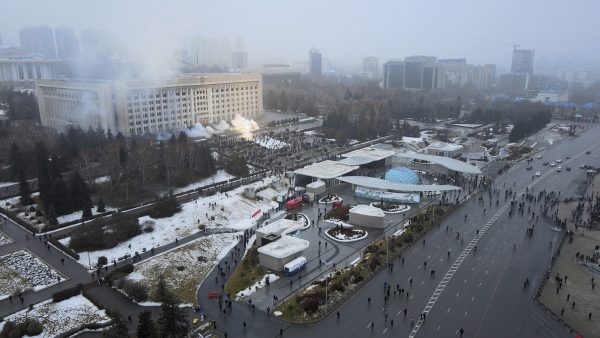 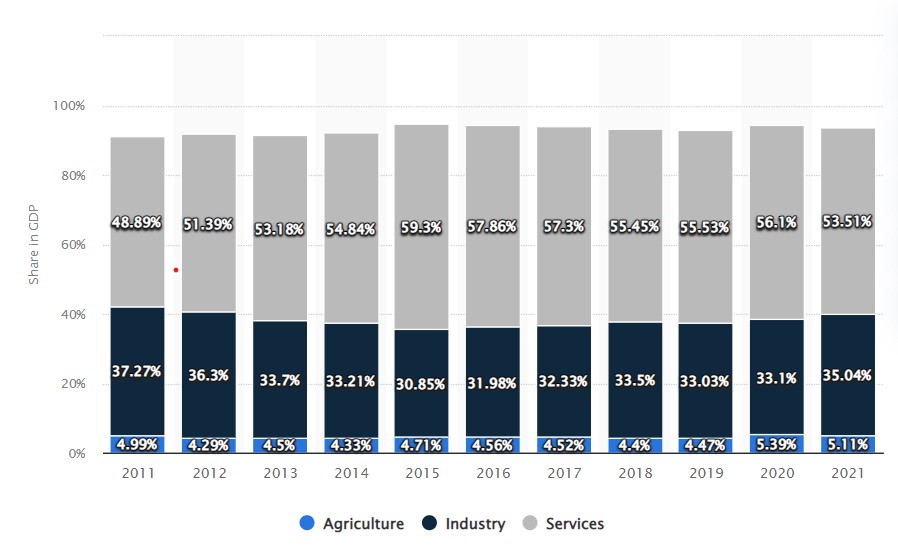 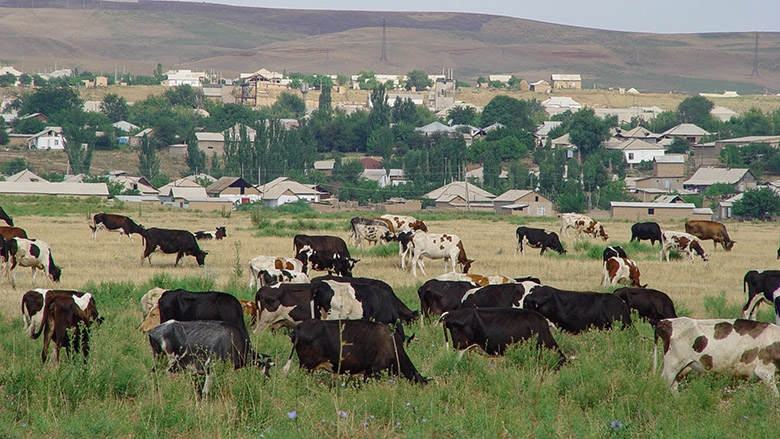 If we break down the contributions to the GDP by sectors, Kazakhstan has a services-tilted economy. Though Kazakhstan has a relative comparative advantage in agriculture, the country remains a net food importer. That is because, despite the fact that Kazakhstan is endowed with the world’s fifth largest agricultural land, sufficient water resources, a clean natural production base, and proximity to large markets, according to the World Bank Group, only 30% of the land has been used.[2] Agriculture only makes a small contribution (an average of 5% in the past decade) to GDP. The government is planning to stimulate agricultural growth (including livestock) to upgrade its value chain, boost exports, and create more jobs, in which process a number of critical investments and transformations are required in both the public and private sectors.

The manufacturing and industrial production sector concentrate on mineral fuels, crude petroleum, liquefied petroleum gas, and coal. Though there have been increased exports of chemicals and manufactured goods such as copper, ferroalloys, and silver, soaring logistic costs and the consequent high final export price is hampering Kazakhstan’s competitiveness in the global market, as well as inhibiting the expansion of investment in non-primary sectors.[3] As a result, industrial product diversification and market sophistication have worsened in the past few years (representing 33% of GDP on average). The government aims to address this issue by constructing a more modernized transport infrastructure and achieve the country’s 2050 Strategy through greater openness and the decentralization of power.[4] The president proposed slicing the strategic goal into specific tasks, including accelerating production and expanding the range of processed goods, advancing industrial capacities, and expediting technological development and digitalization of manufacturing industries.[5] 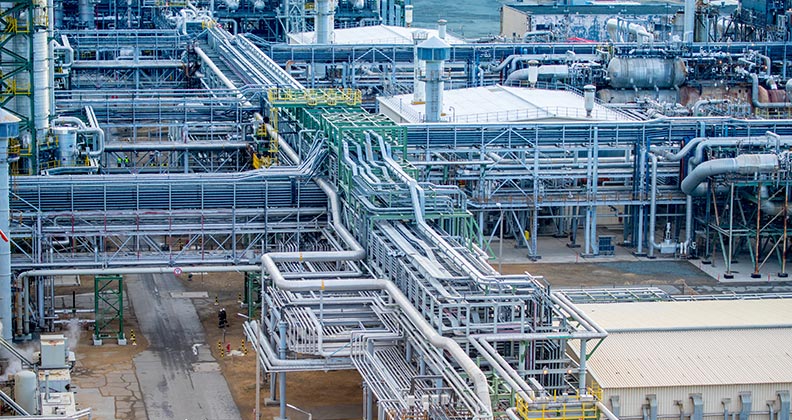 The services sector is not only the main driver of the economy (averaging 55% in the past decade) but also the largest employer (64% of the total workforce in 2019).[6] The main services subsectors are wholesale, retail trade, transport, financial services, education, healthcare, and real estate. Trade plays an essential role in Kazakhstan’s development. It offers opportunities for the country to diversify its economy away from oil and hedge the risk of external commodity price volatility. But to benefit from these opportunities and be on the way toward economic diversification, Kazakhstan may need further structural reforms to address gaps in transportation and logistics, remove infrastructure bottlenecks, divert “high-potential” sectors towards global value chains, facilitate the functioning of factor markets (finance, land, and labor), and stimulate the development of small and medium businesses. 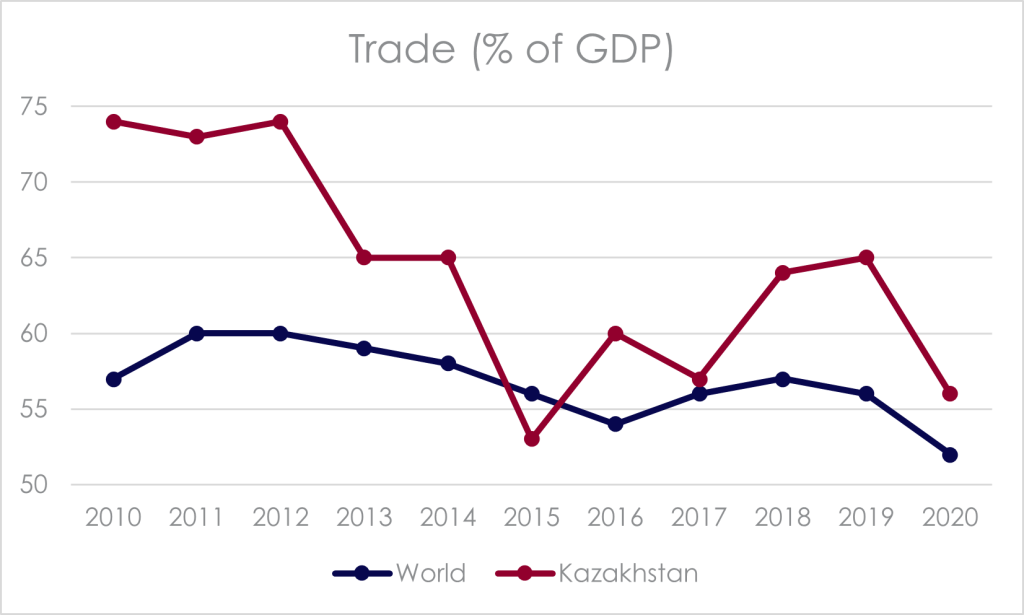 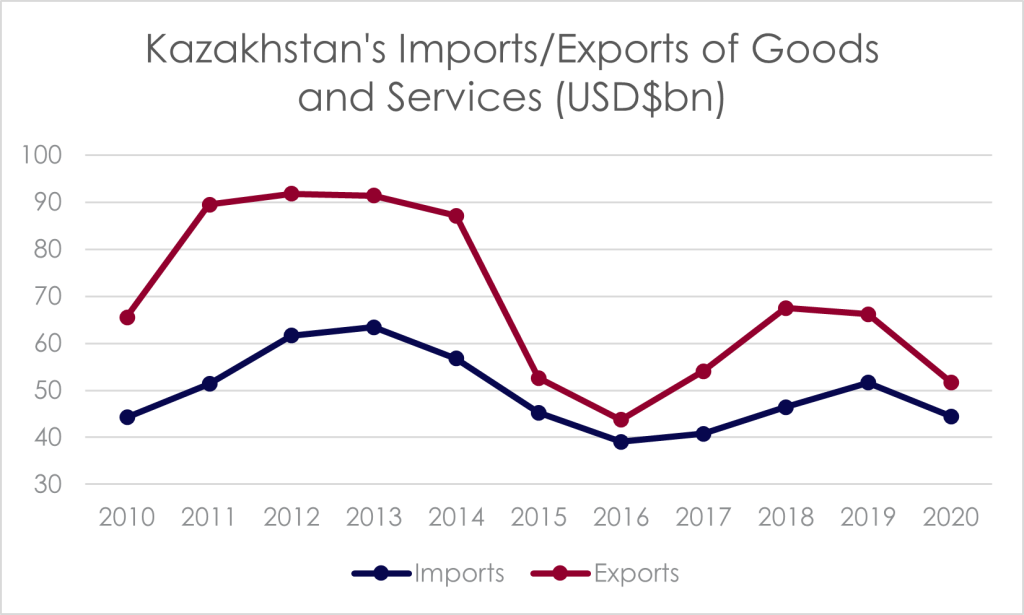 Consequently, Kazakhstan has decided to bet on trade innovation and the inflow of foreign investment to transform into a more diversified economy. International trade has long been playing a vital role in Kazakhstan’s economy, with a slightly above world average trade-to-GDP ratio. On the one hand, Kazakhstan is a founding member of the Eurasian Economic Union (EAEU) and has become a member of the WTO since November 2015, with 3,512 tariff rates lowered gradually to an average of 6.1% in 2020.[7] Major imports include electronics, machinery, mechanical appliances, mineral products, transport equipment, base metals, chemicals, and food and beverages, while the top import partners are Russia, China, South Korea, and Germany.[8] The country currently has 29 free trade agreements, mainly through EAEU; yet nontariff barriers are still high, such as the long waiting to clear exports and imports, as well as the recent move towards import substitution to protect a few local industries, given the current geopolitical situation.[9]

On the other hand, while the bulk of exports still comes from oil, Kazakhstan has been trying to diversify its exports with the goal to increase its non-commodity exports to $41 billion by 2025. In 2020, Kazakhstan’s exports in services only accounted for 10.8% of exports in commodities (USD$5bn vs. USD$46.4bn), with the majority exporting to China, Italy, Russia, and the Netherlands. The Kazakh Ministry of Trade and Integration has launched a couple of policy instruments to boost trade relations between Kazakh enterprises and potential importers, traders, and distributors; for instance, the export accelerator program directed 35 Kazakh companies to the market of China via B2B meetings in 2020.[10] Nonetheless, the supply chain disruption in the past two years due to the Covid-19 pandemic has presented tough challenges in logistics. Hence the formation of convenient logistics routes might bring positive spillovers to exports, particularly along the Belt-and-Road (BRI). It is estimated that a reduction in shipment time is usually critical to the energy sector but can benefit non-oil exports even more, precisely those time-sensitive inputs.[11] Besides, aligning exports with this trend depends on the government’s effectiveness in implementing complementary reforms that encourage supply, as well as on the number of adequate foreign investors with the requisite technology to produce competitively. 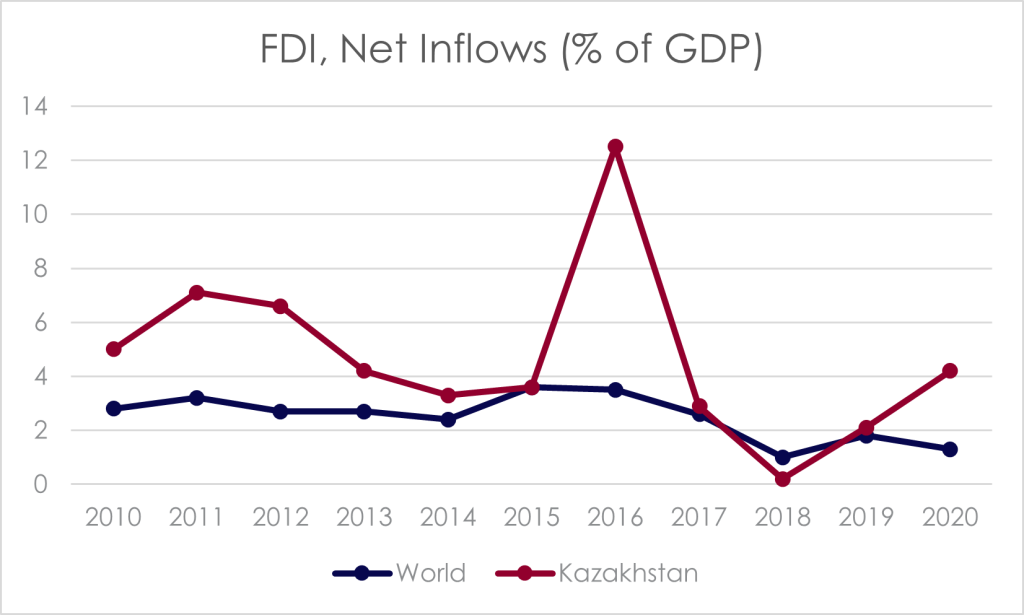 So far, Kazakhstan has established 13 special economic zones and 23 industrial zones with the necessary infrastructure, legal framework, and special benefits and tax incentives to attract investors. It was ranked 25th
in the Ease of Doing Business among 190 countries in 2019, ahead of big
economies like China and Japan and most European and ASEAN countries.[12] FDI, or foreign direct investment, though not a direct component of GDP, is one of the most significant sources of capital inflows, an integral part of an open and effective international economic system, and a major catalyst to development, especially for developing countries and emerging market economies. The Kazakh government recently approved a new investment policy concept in June 2022, aiming to bring the level of investment in fixed assets to 25.1% of GDP and increase the inflow of foreign direct investment to $25.5 billion as early as 2026. “It is necessary to expand the sources of financing of investment projects in non-resource sectors of the economy,” said Alikhan Smailov, the Prime Minister. The long-term plan is to reap the benefits of FDI, such as improving labor productivity, increasing the volume and complexity of exports, developing new production facilities for higher value-added products, and gradually localizing production.[13] Last year, Kazakhstan’s FDI volume doubled, with capital coming primarily from the Netherlands, the US, Switzerland, and
China.[14]

After all, under the global shadow of low economic growth, unyielding inflation, and interest rate hikes, compounded by the Russia-Ukraine geopolitical crisis and the aftershocks of the pandemic, it is not likely the case – at least in the coming years – that Kazakhstan will easily accomplish its 2050 Strategy and squeeze into the top 30 global economies. Yet one thing is for sure; the country has never been more open than it is today. 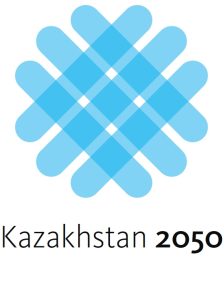